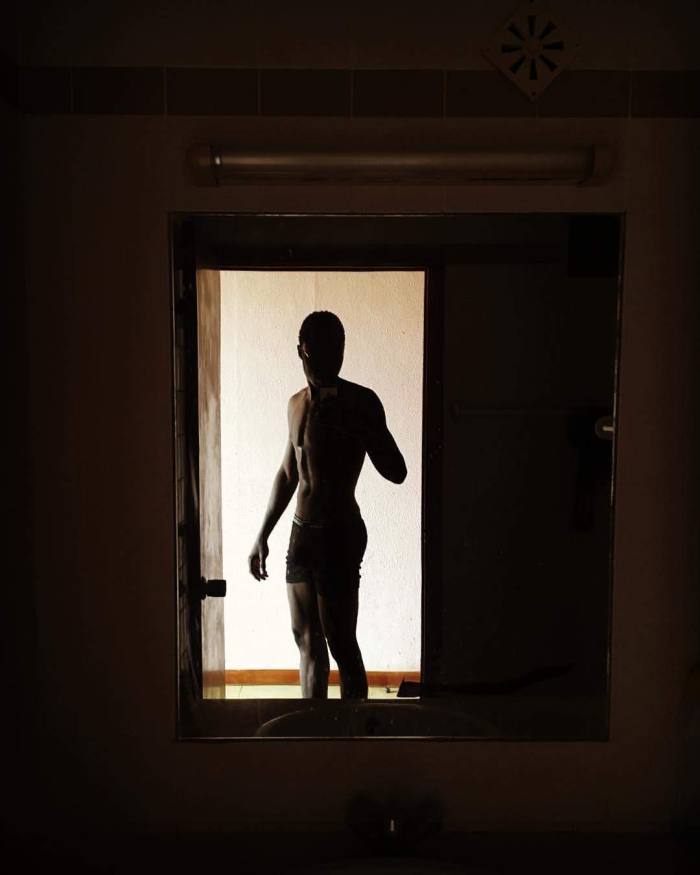 I’m walking by Ocean Cafe – a really cool bar/restaurant/lodging space in front of the small city square, close to the beach.

Someone calls out to me.

I turn around to look at him.

It’s this guy – some Spanish speaking guy. He looks like he’s in his late fifties- or maybe he’s older, I’m not quite sure.

Every now and then we come across each other, and he’s always trying to start up a conversation somehow.

He’s from the Canary Islands I think. He speaks Spanish.

I don’t speak Spanish. I’ve been learning a little Portuguese-esque here and there, from my interactions with Cape Verdean natives in their Creole version of the language.

I’ve realized Spanish and Portuguese are actually very similar. Normally I would expect to still understand this Canarias guy somewhat, but his unfamiliar accent adds a-whole-nother dimension to his speech.

It feels like he’s talking very quickly, and so I never understand a word of anything he’s saying.

There was this day he invited me to join him at a table where I think he was having a drink. He looked very frustrated.

He ranted, waving his arms about in the air.

In my head I was like Okay, from the look of things there’s an issue. Okay.

I just sat there and tried to be empathetic.

Now I’ve come across him again.

One of his knees is in a brace. And he walks with a limp. I’ve always known him like that.

He also looks frustrated again today. He walks up to me and begins to utter some more utterly unintelligible sounds.

At some point he offers for me to come along with him. Says I look very untidy. Says I should come spend some time at his apartment.

I can make out that much from what he’s saying.

The past number of months have been me seriously thinking about my life. I’m currently on a gap year from college with practically no money. My intention is to utilize the ample time and space I have right now, to figure out my life direction.

If I put in some effort I could probably get a job working hospitality somewhere on the island. Job in a hotel or something. I speak English, and that’s valuable here because you’ve got a good number of English-speaking tourists in a country that speaks primarily Portuguese (Creole).

But that’s not my issue. Working a job in hospitality somewhere and having enough financial resources to procure access to the usual living amenities – “Condição” as Cape Verdeans would call it – That has absolutely no effect on the higher-order ambiguity of overarching life direction that constitutes the existential quagmire I’m currently embroiled in.

Hygiene hasn’t exactly been on top of my priority list for a while.

So yeah. I probably look very untidy. He most likely has a point.

I go along with him. The Canarias guy.

We’re at the building where he stays.

It’s actually right behind the defunct hotel where I live.

The building where I live used to be a hotel owned by an airline. “Aeroflot” or something. Their air crew and flight passengers used to lodge there during stopovers, from what I heard. At some point the airline ran into some sort of a disagreement with the Cape Verdean government, and they were dispossessed of the hotel – something like that.

The building is fine – the location is actually great, it’s like 10 – 15 metres from the beach.

The studio apartment where I stay, has a super cool beachfront view.

The only issue is amenities. The building isn’t actively maintained by the government, and so that means there’s no electricity, running water, etc.

At Hotel Aeroflot I’ve got shelter, and I’ve got privacy. I’ve also got a super-cool view. I’ve got no security though. Those pesky Cape Verdean neighbours keep burgling the apartment every now and then – it’s so frustrating.

Electricity and money are the things that make it necessary for me to leave the apartment on a frequent basis.

We’re at the building where the Canarias guy stays.

We walk by the security guard. He’s a tall, muscular and very-dark-skinned Senegalese guy. I know him. Well, kind of. We have lunch together every now and then at Nongo’s place.

Nongo is a Senegalese artist who works from a studio apartment at Hotel Aeroflot. He makes interesting artwork of dancers I think, and silhouettes of people with wide straw hats paddling on canoes against the backdrop of idyllic sunsets.

We’re on the same hotel floor.

He’s got a group of like six people who work with him on the art. They make the pieces with paint, brushes and sand somehow. They use a good amount of sand.

In addition to working on the art, I believe Nongo manages the relationships with his retailers and stuff, who eventually sell the artwork to tourists on the island.

We met for the first time, on some random day. I was extremely hungry. I had absolutely nothing to eat. I was sitting down in front of the apartment where I stay, staring listlessly at the beach ahead. I was probably on the verge of dropping dead or something. Spending my last moments as a sentient instance of the Homo Sapiens species, staring at the glistening crystal-blue beach ahead of me – Praia Antonio Souza.

Wonderful. Because I can eat the beach.

Nongo was walking by. He could probably tell I was hungry somehow.

At some point he invited me to come join him and his artisans for lunch.

He made gestures with his hand – moving his hand towards his mouth.

I gladly obliged. With the final quotient of energy left in my body, I lifted myself up to my feet.

They were having Chebujeri – it’s a Senegalese dish of rice cooked in spicy tomato sauce. They had seasoned cabbage and fish and all sorts of good stuff. Apparently there are a number of Senegalese spots in Santa Maria that make traditional Senegalese food for the community here.

Chebujeri is similar to Jollof rice – a dish found in a number of West African countries. Like Nigeria.

We’re at the building where the Canarias guy stays.

We just walked by the tall muscular Senegalese security guard.

He also works security at Odjo D’Agua hotel. Odjo D’Agua is a beachfront four-star hotel about five minutes away from here.

There was this day he saw me at Odjo D’Agua. Having something to eat and using the internet. I was with my computer. It’s a 15″ MacBook Pro I bought in San Francisco.

I imagine it was an astounding sight. There I was, sitting at a four-star hotel with a computer that was worth like a few thousand dollars (or something), but I was frequently in situations where I had no food to eat.

I was eating food at this really-nice hotel not because I had ample money, but because I needed a reason to spend as much as time as I could using their wonderful Wifi network.

That Odjo D’Agua wifi is something else.

Honestly it’s confusing for me too. I myself don’t understand my life.

The next time I was at Nongo’s place for lunch, I could hear a conversation erupt between the security guy and everyone else the moment I left.

He was about to regale them with tales of me and my expensive computer.

As I walked away, I could hear him yell “Original!” amidst some other things he said in Wolof.

We’re at the Canarias guy’s apartment.

I would probably have found the apartment much more awe-inspiring if I didn’t live in the building right in front. With an even closer view of the beach.

We talk for a bit. He says he used to be a journalist. He’s retired now.

He shows me a couple of newspapers and stuff.

At some point he suggests I should go take a shower.

I oblige. I could definitely use a warm shower right now. There’s no hot water at Hotel Aeroflot.

I’m in the shower. Covered in lather.

At some point the Canarias guy walks in.

I’m not sure what he’s doing.

Like dude I’m naked, can’t you wait till I’m done.

I’m not too bothered by it though. I spent about four and half of my six years of high school in Nigeria, in boarding school. In the male hostel I frequently had to take baths in an open space with tens of other flailing, naked, lather-covered boys.

And so I’m not entirely uncomfortable being naked around guys. Not really.

I keep washing my body.

At some point I feel a hand trying to slither through my legs.

I open my eyes.

AHHHH SO THIS IS WHY YOU WERE PERSISTENTLY INVITING ME OVER TO YOUR APARTMENT!!!!

OHHH SO YOUR PLAN ALL THIS WHILE HAS BEEN TO GET ME NAKED IN YOUR BATHROOM!!!!!

He tries to persist.

I express to him some more that I’m not interested.

I’m careful not to physically touch him.

He’s this very frail-looking guy limping about in his knee brace.

I can touch him ever so slightly, and he’ll end up falling on the floor and hitting his head on something.

I’m not interested in being the guy who killed a Spanish tourist in Cape Verde. I’m still debating with Cape Verdean law enforcement on the validity of my visa-free stay in this place.

I verbally express some more that I’m not interested in his current intentions.

I finish up my bath and quickly head out of Mister Canarias‘ bathroom.

Image: In the bathroom mirror of the Hotel Aeroflot studio apartment.