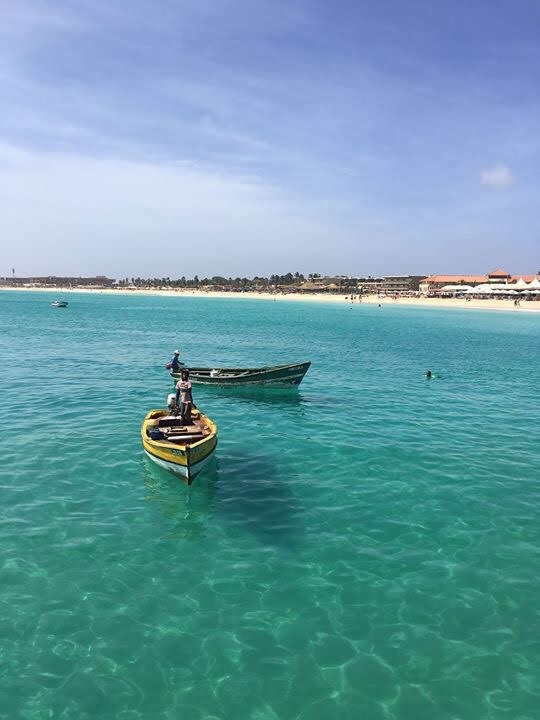 I just escaped the building.

Sunday Service will begin very soon. Everyone finds it very weird and disrespectful whenever I walk right through an ongoing gathering like they’re not there.

Their church gatherings are where they congregate to commune with God. Walking right through an ongoing gathering is perceived as a flagrant disrespect- both to them and to their almighty God.

Well it’s not completely my fault. The space within which they hold these meetings is right between the entrance and the rest of the building. And so sometimes when I need to get into the building and upstairs to the room where I’m arguably being lodged as a guest, I have to walk briskly through their gatherings so I can be on my way.

And so this morning I’m exiting the building before their Sunday service even starts.

I am at Hotel VIP Praia.

Hotel VIP Praia is a 4-Star hotel erected on the expansive black rocks lining the southeastern coast of Santiago- the capital island of the Cape Verdean archipelago.

I was recently here to make inquiries about the hotel facilities.

At this point in time, I am aware there is a penthouse bar overlooking the awe-inspiring crystal blue ocean water. I exchange pleasantries with the receptionists and head into the elevator.

I am yet to come to a convincing understanding of why the beaches in Cape Verde have such crystal blue water.

I raised this question with a Dutch engineer I met on Sal island. He brought up an interesting idea, and we hypothesized along the lines of sand particle weight.

Maybe the sand particles here were somehow heavier than in other places, and consequently always settled to the ocean floor very quickly- leaving the water crystal blue.

I think it makes sense, but I’m not too convinced that’s the answer.

I am at the penthouse bar.

I walk past the bar, and past the rooftop swimming pool on my left, as I head up a staircase.

There is an elevated platform right above. I ascend the stairs up to this platform and take a seat.

I take a few minutes to marvel at the impressive woodwork in my immediate surroundings, while breathing in the refreshing ocean air and thoroughly enjoying the engrossing view of the entrancingly blue ocean water.

I open up my computer and attempt to connect to the WiFi.

My time at a college in the USA whose program was structured around online classes and distributed learning, has given me considerable experience with shamelessly striding into the most upscale of locations primarily intending to make use of their WiFi network.

In the US no one seemed to care if I spent hours in a cafe or restaurant, making pretty heavy use of their WiFi while buying just a few cups of coffee and some light snacks.

In Germany things were also similar, although some places could be problematic.

In Cape Verde, the smaller restaurants and cafes made me feel guilty. Past a certain point I would begin to literally feel the owner/manager’s gaze drilling into my skin. Or maybe that was just me feeling self-conscious.

But this right here is Hotel VIP Praia- a 4 star hotel. This sublime edifice is definitely more than capable of handling my meager WiFi consumption. I prepare myself for a good time.

There is a problem with the WiFi. The computer is not connecting to it.

I walk about the roof of the bar, and eventually head down the stairs to the rest of the penthouse.

There is a guy working on a computer. He has multi-colored tattoos all over his body. Arms. Legs. He also has a fluffy white square beard. I think he looks really interesting.

I mention something about the Wifi. He empathizes, and says a WiFi extender would be a useful installation. To extend the network to the area above the bar. I agree with him.

I take a seat opposite, and we begin to engage in conversation while I connect. At some point I learn that he’s a consultant with the International Monetary Fund.

I am very very surprised. I had no idea the IMF hired people who were like covered from head to toe in multicolored tattoos.

My classmates at the US college during my last semester there, were beginning to experience this existential anxiety involving charting out some sort of professional path for oneself. Frantic internship applications were the principal community-wide activity.

Students who had secured shiny-sounding internship positions were being quietly envied by others. The college itself was featuring these shiny professional engagements on their website.

The school hired some Professional Development Managers or something like that. They periodically organized Career Development meetings where they gave guidelines on how to craft the most effective CVs.

I never went for their meetings. One of them kept sending me emails. Jesse or something like that. He was probably a nice person, but the context of his employment in the university and what he represented, made me find him and his emails very annoying. I never replied.

I even began to hate the word “career”, because to me it represented this very ascetic concept that required one to completely shed every strand of individuality and personal idiosyncrasy, to facilitate direly needed absorption into the cold, phlegmatic and completely unfeeling machine of the world of work.

And so sitting here right now at a 4-star hotel penthouse bar, across the table from this white-bearded biker guy covered in multicolored tattoos- the very exemplar of individuality and personal ideosyncracy- who is currently on a professional assignment with the International Monetary Fund, I feel like there is hope for me. Me with my complete disregard for somber career development meetings and lifeless CVs.

I casually give an exposition on some mathematical nuance I’m engaging with, in the course of some of my work involving Artificial Intelligence and Endangered Languages.

He seems very interested. I provide some more detail over which we discuss.

The mentioned research endeavor was one I crafted myself as a conceptual spear head with which I intended to transpierce and forge a path through the nebulous terrain of life professions. It did not exist prior.

It was a number of things to me:

It was an emboldening intersection of passions, skills and expertise which I wished to structure my life around.

It was also an endeavor to procure solutions to what I believed to be a pressing world problem.

In addition however, I think it also sounds very cool and important. You know, something you can casually bring up in conversation with a consultant from the IMF.

We’ve been chatting for over an hour, all the while sipping on beers and working on our Macs.

We’ve talked about his motorbikes, about his family and mine, about his children’s disapproval of his tattoos, and about my mother’s sudden visit to Cape Verde to understand why in the name of God I took a gap year from college in the US.

Now we’re talking about his current relationship. With a woman he met in Albania. She recently created a photography page on Facebook, where she posts pictures he takes during his travels. She sounds sweet.

At some point the excited bartender offers to bring up some Cape Verdean girls for entertainment.

The IMF guy turns to him:

Sorry I’m not here for that kind of fun, thank you.

At some point his supervisor joins us at the table.

First I am very taken aback by the very idea that this person has a supervisor.

The supervisor is a cool guy. He brings some very interesting perspective to the conversation. Sheds light on some illicit activities foreign hotel chains are engaging in:

Leveraging subsidized import duties to sell imported construction materials at a profit on the black market. IMF is here to keep such behavior in check.

I nod my head in excited understanding.

At some point in our conversation, the tattooed guy mentions that I’ve had a very accomplished day. I laugh out loud and express my complete agreement with him:

Escaping Sunday Service to end up having a super interesting chat with IMF officials at the penthouse bar of a 4-star hotel overlooking the Cape Verdean Atlantic. Excellent day.

We talk some more. Later the supervisor gets up to leave. It’s his birthday today. I think it’s his seventieth birthday. He’s probably going in to prepare for some sort of celebration later in the evening.

Image: View from the Santa Maria pier at Ilha do Sal.